Daniel Cohen on the podium of the Teatro La Fenice Orchestra

He conducts Beethoven’s Fourth and Seventh Symphonies at the Malibran and the premiere of “Sul limitare della notte” by Alvise Zambon.

Daniel Cohen on the podium of the Teatro La Fenice Orchestra, to conduct the next concert of the Symphonic Season 2019-2020, scheduled at the Teatro Malibran on Friday, January 10, 2020 at 8.00 p.m. (S turn) and in replica on Sunday, January 12, 2020 at 5.00 p.m.
The young Israeli maestro Daniel Cohen, for the first time on the podium of the Orchestra del Teatro la Fenice, born in 1984, currently chief musical director of the Stattheater in Darmstadt, will lead the Venetian ensemble in a program that will pay homage to Ludwig van Beethoven, with a cameo aimed at contemporaneity: The evening will open with the first performance of the symphonic overture “Sul limitare della notte”, a commission to composer Alvise Zambon as part of “Nuova musica alla Fenice”, a project carried out with the support of the Fondazione Amici della Fenice and with the special contribution of the Fondazione Spinola Banna per l’Arte; this will be followed by the performance of Beethoven’s Fourth and Seventh Symphony, a composer to whom the symphonic programme is dedicated on the 250th anniversary of his birth.

Alvise Zambon, born in 1988, describes his composition inspired in some way by fireflies as follows: “The frequency, intensity and rhythm of the impulses generated by fireflies are well known to scholars: each type of firefly has its own precise identification code which differs both according to its genre and family. Well known and curious is the case of the females of Photuris, a type of predatory firefly able to imitate the impulses of other species to attract the male (usually Photinus) and kill him by devouring him. “Sul limitare della notte” it draws inspiration from this micro-world of codes, rhythms, impulses to explore the possibilities offered by the instrument ‘orchestra’ in search of new musical boundaries based mainly on perception”.
Written for an orchestra with a Haydnian structure, Symphony no. 4 in B flat major op. 60 by Ludwig van Beethoven (1770-1827) was written in a few months, in the late summer of 1806, for Count Oppersdorff, an aristocrat who kept his own court orchestra: a well-paid work for which Beethoven temporarily set aside the Fifth, then already in an advanced phase of composition. The result was a work with a traditional and disengaged character: a symphony with “Greek grace”, “winged lightness”, but, for its originality and creative freshness, anything but ‘minor’ in the symphonic catalogue of the master from Bonn.
“Sinfonia par excellence” – as Theodor W. Adorno called it -, Beethoven’s Symphony No. 7 in major op. 92 made its debut in Vienna, five years after the creation of the Pastoral, on 8 December 1813 in the Aula Magna of the University, with Beethoven himself on the podium. It was an evening of charity, organized by Johann Nepomuk Maelzel for the Austrian and Bohemian soldiers wounded in the Battle of Hanau. And the concert was a great success: the Viennese bourgeoisie couldn’t wait to demonstrate all their anti-Bohemian sentiment and the orchestra, made up of the best musicians in the city, played excellently. Although not all the critical judgements of the time were fully positive – for some the Symphony exceeded in extravagance – it is Richard Wagner’s famous comment, pronounced a few decades later, that sets the essence of this page, with words destined to remain in the history of music: “This Symphony is the very apotheosis of dance, it is dance, in its most sublime essence”. Dance as sublimation of a rhythmic essence, which runs through the whole work in a gradual and constant crescendo of intensity.
As usual, the concert on Friday 10th January will be preceded by a free entrance meeting with the musicologist Roberto Mori, who will illustrate the musical programme from 7.20 pm to 7.40 pm.
Tickets for the concert (from € 20.00 to € 60.00) can be purchased at the Vela Venezia Unica sales points of Teatro La Fenice, Piazzale Roma, Tronchetto, Ferrovia, Piazza San Marco, Rialto line 2, Accademia, Mestre, by telephone (+39 041 2424) and online at www.teatrolafenice.it 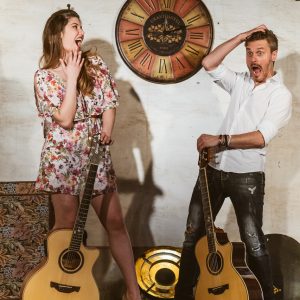 The acoustic duo of Ten Minutes Late at the Hard Rock Cafe Friday Night scheduled for January 10 at 21:00. Even...