Today, 25th March 2020, our Magnificent City of Venice turns 1599 years old and so many best wishes to our Queen of the Seas!
But Venice, was it really founded on March 25th 421 AD?

Actually no, March 25th is basically a date referable to the Catholic religion, as the day coincides with the Annunciation of the Lord (i.e. the announcement of the virginal conception and virgin birth of Jesus which is made to his mother Mary and his father Joseph by the archangel Gabriel).
As for the year, however, according to the Chronicon Altinate (11th century) the first settlement in Venice on the Riva Alta (Rialto) dates back to 25 March 421 with the consecration of the church of San Giacometo on the banks of today’s Grand Canal: recent studies have shown that San Giacomo di Rialto is much later, dating back to the middle of the 12th century.

The story is therefore in reality much more complex than the legend would have it, here below we report its beginnings, with the collaboration of Wikipedia:
The Venetian lagoon was formed in the 8th century B.C. from a previous river-palustrine environment and it is assumed that there were human settlements here since prehistoric times due to the wealth of resources that favoured hunting and fishing.

In pre-Roman times, i.e. in the Paleo-Venetian period, civilization was well rooted in the area with populations dedicated to fishing, salt production, maritime transport and other related mercantile activities. A hub of intense commercial traffic that connected the Adriatic with central and northern Europe, in this period some settlements developed, among which the centre of Altino stands out, now with a proto-urban physiognomy.
According to Titus Livy, Antenor and the other fugitives from the Trojan war came, finding safe refuge, near the Venetian coast. Aquilo went to found Aquileia, Antenore founded Padua, Diomede founded Adria and Spina, Clodio founded Clodia (Chioggia) and Enea founded Venice in 1.107 B.C..

Martino da Canal also describes how the Trojans had landed in the area of Olivolo (Castello) and would place their first settlement here.
The coming of the Romans took place peacefully without submission. The system of ports was strengthened (Chioggia dates back to this period), while the hinterland was reclaimed and centuriated, which is still visible in the current layout of roads and ditches. The lagoon perhaps became a holiday resort for the nobility, as some findings testify.

The inhabitants of the mainland sought refuge in the lagoons following the various waves of barbarian invasions that followed from the fifth century, in particular that of the Huns (452) and the Longobards (568). However, Venice was then presented as a set of small settlements still very heterogeneous, while some neighboring centers such as Torcello, Ammiana, Metamauco became more important. At the same time, the major religious institutions such as the Patriarch of Aquileia in Grado and the Bishop of Altino in Torcello moved to the lagoon.

The continuation, is history and glory, of our Venice! 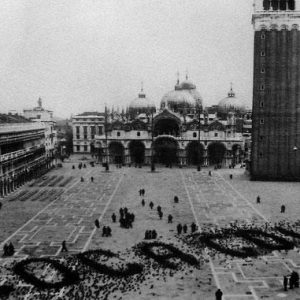 Pigeons and Coca Cola These days we are witnessing desolating shows because of the Corona Virus.One of these, is surely...