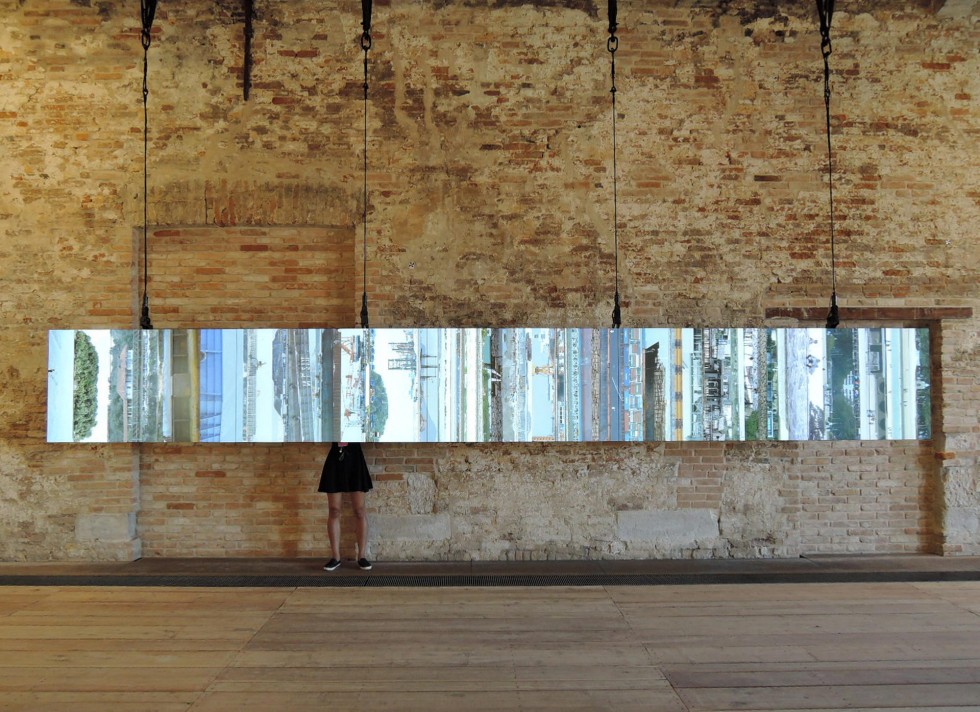 With her monstrous phallus and pendulous balls, Britain’s Sarah Lucas has sunk to the occasion.

As I made my way round one of the two main sites that form the core of the Venice Biennale, I watched a man (topknot, statement specs, head to toe in black – he was born to be there) take out a bottle of eye drops and refresh his exhausted peepers. By the time I had finished, I rather wished I had a gallon or two of the drops myself. The first thought the biennale prompts is: “Gawd, how much stuff is produced.” The second is: “And how much of it is landfill art.” Seeing so many exhibits in quick succession defocuses the mind just as it does the eyes.

For the 56th incarnation of the world’s pre-eminent contemporary art jamboree, there are 84 national pavilions, each supposedly showcasing the best that their nations have to offer – although Kenya withdrew when its Italian curator decided to show mostly Chinese artists (a sign of where that country now looks for its money) and Costa Rica was left with little work of its own to exhibit when it tried to charge its artists $5,000 each for the privilege.

Most of the pavilions are at the Giardini, where many of the old art nations put up their exhibition buildings (in every style, from Greek temple to Scandinavian minimalist) in the biennale’s early years. The bulk of the others are among the vast spaces of the Arsenale, the naval factories and warehouses that for centuries kept Venice’s military-industrial complex functioning. There are also 44 “collateral events” (sanctioned by this year’s guest curator, the Nigerian critic-poet Okwui Enwezor) and a further 80 associated displays scattered throughout the city’s churches and palazzi. 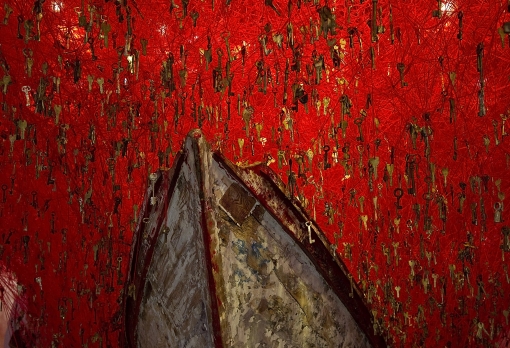 Under the red sky: Chiharu Shiota’s installation The Key in the Hand.

The acreage is huge and it is all filled. As is necessarily the case, some of the ­filling is much better than others. There is a vast amount of generic, high-concept art – video works in which nothing much happens, very slowly, and that no one watches; rooms with enigmatic empty boxes; vaguely humanoid figures composed of random objects; vitrines full of sheaves of paper; piles of coloured concrete and rubble; agitprop; and, regardless of the irony (the biennale likes to critique capitalism while being powered by money), a live reading of all three volumes of Marx’s Das Kapital, which will continue unabated for the festival’s seven-month duration. God help the performers.

There is a lot more overt political and social comment. Photographs of chain gangs of Brazilian prisoners and visually lumpen reproductions of Nigerian newspaper reports on emigration jostle with images of Chilean transvestite prostitutes and, in the Ukrainian pavilion, a touching multi-screen piece showing the empty table settings for soldiers fighting the separatists, laid out in the hope that they will return home. There’s work about pollution, industrial production, armaments and the environment (in the Tuvalu pavilion, visitors must cross large pools of water on walkways centimetres above the surface, a literal but effective symbol of the islands’ fragility in the face of rising sea levels).

Among the welter of artists trying to say something, it is disappointing to find Britain’s representative, Sarah Lucas, saying nothing. She has sunk to the occasion. Her plaster casts, moulded from the lower torsos of various friends and with cigarettes inserted into vaginas and anuses, may have raised an eyebrow 20 years ago but now they are simply trite and dated, devoid of both content and impact. Lucas is 52. She has also adapted her early method of stuffing tights to form mannequins, here cast as solid rather than soft, Dalí-esque sculptures. Black cats and a giant, yellow, priapic figure with a monstrous phallus and pendulous balls (so good in her opinion that there’s one version inside the pavilion and one outside) make thin gags at the best of times and, displayed here, are simply puerile and show an artist who has failed to develop. She can do better.

There is infinitely more wit in the Canadian pavilion next door, where the BGL art collective has set up a series of Heath Robinson inventions that turns the most basic of items – massed paint tins, each dripping numerous colours; a room-size game of Mouse Trap in which coins roll down ramshackle tracks to form delicate patterns on a Perspex grid – into surprising and visually interesting installations. They have the lightness of touch that so palpably evades Lucas.

Among the painters, very much in the minority here, Peter Doig’s colour-saturated almost-folk-tales in which a Rastafarian Lion of Judah features prominently (a nice nod to the lion of St Mark) stand out. A less familiar painter is the Romanian Adrian Ghenie. His series of pictures Darwin’s Room uses staid portraits of Victorian worthies as a basis and then deliquesces them. By smudging and dabbing, thinning and patterning, he turns them into pieces that are neither representational nor abstract but use the possibilities of paint with imagination.

The American sculptor Melvin Edwards does something similar with solid metal, taking axes, horseshoes, scissors, chains and machine parts and crushing them together into tight lumps. As a series displayed on the wall, they look as though they should be portrait busts but, seen from close up, they become fetish objects – dark, weighty and sinister. The Algerian artist Adel Abdes­semed repurposes metal in a more pointed way. Nymphéas assembles clusters of machetes into clumps that resemble a twisted version of Monet’s Water Lilies.

The two most affecting works come from Turkey and Japan. Kutlug Ataman is one of the most significant figures currently at work and with his Portrait of Sakip Sabanci he pays homage to a Turkish philanthropist. It takes the form of a floating sheet com­prising 9,216 LED panels, each showing a passport-sized photograph of someone whose life was touched by Sabanci. Every face is a pixel in the whole and, as you watch, they flicker and change into someone else’s. The effect is touching and mesmeric.

To my mind, the most purely beautiful work among those on show is Chiharu Shiota’s The Key in the Hand, an infinitely complex cat’s cradle of red threads from which hang thousands of rusted keys, all emerging (or falling) like a cloud from two wooden boats. The installation is as delicate as a traditional patterned kimono. It carries a hint of Hokusai and the strangeness of manga; and the keys represent an infinite number of memories. It is simply a lovely thing. Such works show that in this artistic Babel, it is still possible for the most clearly enunciated voices to stand out.

The Venice Biennale runs until 22 November 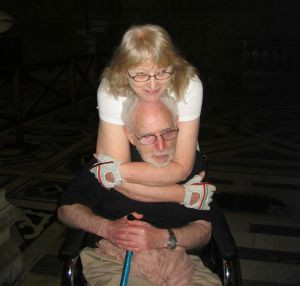 Kind World #13: ‘Take Me Back To Venice’ By ZACK EZOR As Parkinson’s disease worsened for Bernard Michaels, his family...