Romulus and Remus, the Lupercal, Father Tiber, and the Palatine on a relief from a pedestal dating to the reign of Trajan (AD 98-117) – via Wikipedia

Italy is not really famous for its dragons and fairies, is it? But you may be surprised by how many legends and folk stories there are!

Many Italian myths and legends come from the Greek and Roman culture, or are the remnants of pre-roman and pre-Christian stories narrated by native people. Many other stories are about saints and biblical figures. Italian folklore also includes stories about some mythological or fantastic creatures, which are similar to those known in many parts of the world, such as werewolves, witches or vampires.

Every Italian region has its own stories, just like it happens with typical dishes. If you like old stories, then this is indeed a good excuse to travel and get to know Italians!

Probably one of the best known Italian myths is that linked to the founding of Rome. 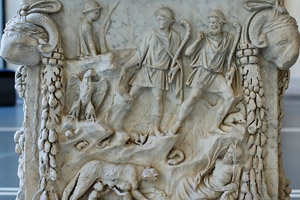 In the year 753 B.C., a couple of twins was born. They were named Romulus and Remus. Their mother was Rea Silvia, a sacred priestess of Vesta, the hearth goddess, and their father was Marte (Mars), the Roman god of war.

Their uncle, who usurped their grandfather’s throne of Albalonga, sent them to death, because he wanted to be the king. But the servant who was in charge of the killing didn’t want to assassinate two innocent babies, so he just put them in a basket and threw it in the Tiber river.

The basket travelled safely until it got blocked in a swamp that was among the Palatino and Campidoglio hills. Here, a she-wolf found the twins and breast-fed them. They were then adopted by a shepherd and his wife. A slightly different version of the story is that the twins were found by a prostitute (also called Lupa, “she-wolf”, in Latin).

Once grown up, the boys killed their uncle, gave the power back to their grandfather, and were given permission to found a new city. Unfortunately, Romolos had to kill his brother Remus, as he dared to pass the line that signaled the walls of the future city holding his sword, an action his brother had strictly forbidden.

So Romolos became the first king of Rome. He governed it wisely, and finally disappeared during a storm. Romans believed his father Mars took him away.

The ring and the old fisherman – this is a story told in Venice. Once, an old man asked a fisherman to take him to San Giorgio Island. The sky was dark and a storm was approaching, but the good fisherman just agreed. Once they reached the island, a soldier hopped on the boat. Arrived in San Nicolò del Lido, a third man hopped on the boat. The sky was getting darker, and the wind was blowing hard, but the three men still wanted to put out to sea, so the good fisherman started to row, and soon a black ship appeared, crowded with devils of every shape and size, that wanted to invade Venice and destroy it!

The three men, who were Saint Mark, Saint George and Saint Nicholas, battled with the demons and finally made their ship sink. The fisherman was so surprised, he couldn’t believe to what he had just seen. Saint Mark gave him his ring, telling him to go to the Doge, the Head of Venice, and tell him everything. He also added, “If he doesn’t believe you, show him my ring”.

The fisherman went to the Doge and showed him the jewel, which was the one kept in the great Basilica, and disappeared just a few days before. The good fisherman was given a rich pension, and the Doge also gave him the permission to sell the sand of the island of Sant’Erasmo. 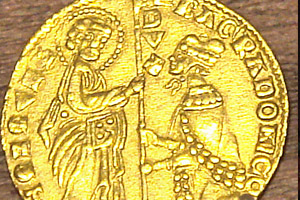 The five most luxurious airport lounges in the world 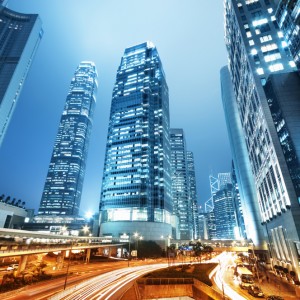 The five most luxurious airport lounges in the world

Cigar lounges, pool tables and a nanny service for the kids while you hit the spa: The five most exclusive airport lounges...