On stage at the Phoenix in national premiere, exclusively from 5 to 9 February.

John Neumeier’s ballet dedicated to Eleonora Duse performed by Alessandra Ferri and the Hamburg Ballett John Neumeier, choreographic fantasies inspired by the figure of Eleonora Duse, staged in exclusive national premiere from 5 to 9 February 2020 at the Teatro La Fenice in Venice, as part of the Lyric and Ballet Season 2019-2020.
Presented for the first time in Hamburg in 2015, the John Neumeier’s ballet dedicated to Eleonora Duse with choreography, scenes, costumes and lights by the American artist will be a tribute to the legendary Italian actress, danced to the notes of Benjamin Britten and Arvo Pärt performed live by the Orchestra del Teatro La Fenice conducted by Luciano Di Martino.

The Hamburg Ballett John Neumeier has promptly joined the choir of the numerous cultural institutions from all over the world that have carried out actions of solidarity and support in favor of the Teatro La Fenice seriously damaged by the high water on November 12, 2019. With an Open Day at the Ballettzentrum in Hamburg, on the occasion of the thirtieth anniversary of its inauguration, the prestigious Choir Centre opened its doors to the public on 25 January 2020 and in exchange for a donation for the La Fenice Theatre offered fans the opportunity to attend the backstage of the ballet Duse and the rehearsals of the youth company at work on a new creation. For this gesture of concrete solidarity, the Fondazione Teatro La Fenice sincerely thanks the Hamburg Ballett John Neumeier.

The creation John Neumeier’s ballet dedicated to Eleonora Duse is inspired by some episodes in the life of the fascinating and revolutionary artist, who between the late nineteenth and early twentieth century influenced celebrities as diverse as Rainer Maria Rilke, Isadora Duncan, Arrigo Boito and Gabriele D’Annunzio. Enchanted by Duse’s artistic and professional charisma, her constant search for a new theatrical ideal and her many relationships of hate/love, Neumeier developed a subjective vision of her biography: renouncing a documentary approach, he invented situations and images to evoke the essence of that unique personality.

“The interest in Eleonora Duse – explains choreographer John Neumeier – soon aroused in me: my acting course at university was based on the so-called Method Acting of the Actors Studio in New York by Robert Lewis and Lee Strasberg, inspired in turn by Konstantin Stanislawski and his Moscow Art Theatre. In the international imagination Eleonora Duse embodied, in an ideal way, its basic concepts: a form of interiority of acting, gestures established to precision and limitation in the external presentation of the character in favor of emotional identification in the role. It has always fascinated me that, at the beginning of the 20th century, a woman may have had such an innovative conception of dramatic art. As always, creating a ballet is a risk, because in this art form there is always something that cannot be expressed in words and whose final form cannot be fully planned. So, in deciding on a particular subject, I rely on instinct. There must be that moment when I feel I can overcome the challenge. […]

Thanks to my experience with the artistic form of ballet – continues Neumeier – I know that the expression of information and facts through dance is extremely ineffective, while it is possible to best represent situations inspired by Eleonora Duse. And this is where the “choreographic fantasies” come into play: in my ballet the situations are invented, but they are based on documentary material collected during my research and from which I develop situations that perhaps never happened, but which in my opinion transpose in a different medium the fundamental traits of the figure of Eleonora Duse”.

Alongside Alessandra Ferri, soloist ‘guest’ of the German dance company, there will be the main dancers and the dance troupe of the Hamburg Ballett, a prestigious choreographic ensemble directed by John Neumeier since 1973. As for the main characters, Hélène Bouchet will be engaged in the role of the maid Désirée von Wertheimstein, Alexandr Trusch in that of the soldier Luciano Nicastro, Jacopo Bellussi in that of his friend Annunzio Cervi; Arrigo Boito, Duse’s ‘mentor’, will be played by Alexandre Riabko, the ‘seducer’ Gabriele D’Annunzio will be danced by Karen Azatyan, also a soloist guest of the German company, while Christopher Evans will play the role of Duse’s companion Flavio Andò. Then there will be the two female roles of his friend, the dancer Isadora Duncan, and his rival, actress Sarah Bernhardt, played respectively by Anna Laudere and Silvia Azzoni. 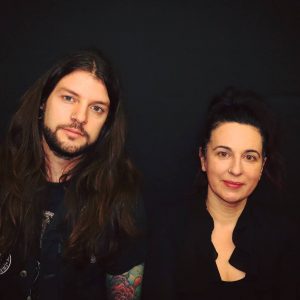 A FULL OF ROCK, PUNK, GRUNGE AND POP SOLO VOICE AND PIANO Friday 7 February, 9 p.m. Rock The Piano Duo at The Friday...