Majestic, epic and surprising in its usual dreamlike dimension, Il Ballo del Doge XXVII edition took place this year in the monumental building of the Scuola Grande della Misericordia, for the occasion transformed by the creative talent of Antonia Sautter into a container of dreams, beauty and magic.

“Carnival Rhapsody: Provocation, Redemption, Miracle”, the Carnival rhapsody elaborated in the three sub-themes of the title of Il Ballo del Doge with an incessant succession of performances by 150 selected performers from various countries, under the eyes of more than 360 guests from all over the international jet set treated, for makeup and wigs, by the make-up artist team of Anna Del Prete’s Academia BSI founded by Diego Dalla Palma. The Doge’s Ball was attended by authoritative representatives of the city and many directors of high-class hotels in Venice. Among the well-known faces were the presenter of the TV program “Uno Mattina” Valentina Bisti and the actress Beatrice Schiaffino.

BREATHTAKING OPENING: VENICE SAVED BY THE GOD OF THE SEAS, POSEIDON

At the opening of the event, a young Poseidon, in his double nature of god of Olympus “tamer of horses and savior of ships”, opened the triumphal procession, dragged by the waves seated on a chariot, preceded by five pairs of dignitaries, until he reached the sight of Venice high, radiant as the sun, above everything and everyone, suspended as it is between Earth and Heaven. Here is the accomplishment of the prodigy: carried by the waves (girls with their bodies entirely painted in body painting), the god of the seas rose acrobatically in the air to pay homage to Venice, which returns to make peace with water to become, in power, the example of the miracle city. In an atmosphere of a Gothic cathedral, the choreographic design of floating figureheads and swirling angels enveloped those present in a powerfully evocative emotional surround, accompanied by special effects, lights, colours and solemn music.

On the first floor, the refined and geometric elegance of an Italian-style garden with evergreen lawns, hedges and flowerbeds overflowing with flowers, was the context in which the stage was set for the artists’ performances, with backdrop and proscenium hand-painted by Paolino Libralato, a scenographic workshop with whom Antonia Sautter has always collaborated. All around the perimeter of the frescoed room of the Misericordia, stairs and balustrades with living statues delimited the arrangement of the tables for the guests of the dinner placée, each identified with the name of a musical form: Preludio, Capriccio, Intermezzo, Sonata, but also named after great composers such as Vivaldi, Corelli and Albinoni or inspired by operas such as Otello, Aida, Nabucco and Tosca.

Following the leitmotif of the Rhapsody, in this garden of wonders Antonia Sautter wanted to propose the best of the 26 previous editions of Il Ballo del Doge (The Doge’s Ball) in this garden of wonders with all the world’s artists who have performed in past kermesses with music, songs and acrobatic numbers, to reformulate them this time in a new key, declined with all the colors and shades of the arts: from comedy to wonder, from the beauty of singing to the harmony of artistic dance, from the magic of illusionism to the madness of the circus, all at the disposal of a pressing meddley that, like Carnival and the mask, makes the fairy tale come alive by freeing the dreamy part of each individual.

With the amazing masterpiece of Il Ballo del Doge 2020, Antonia Sautter wanted to honor Venice and the vital industriousness of the Venetians who three months ago courageously proved to get up from the water more motivated than ever. At the same time she paid tribute to the female universe and the creative energy of women with an exceptional catwalk: the parade of the queens of history, important personalities who have changed the destiny of the world: from Elizabeth I of England, to Cleopatra, from Isabella of Castile, Madame de Pompadour, from Catherine of Russia to the Venetian Caterina Cornaro.
“This year – underlined Antonia Sautter in her greeting to the guests – I want to welcome you accompanied by my Queens, tenacious women who have made history and handed down an important legacy: the fighting strength and determination to face adversity and turn it into an opportunity”.

Antonia Sautter has always been sensitive to the problem of respect for women, and she is planning to dedicate an ad hoc event to them in order to keep the attention on the subject high.
In addition, Antonia Sautter added: “To face the new challenge I was about to welcome in this wonderful new location, I would need a quick course of Miracles! I would not have imagined that, in the following months, even Venice, my Queen of the heart, would have to face a great calamity; so that the Miracle that I so much invoked became the thread that has linked the days and nights until today. This evening, for me, the Miracle has come true, because I am here with you, Women and Men, who see in the present something that for others is invisible, without fear of not making it, transforming the world into a place full of opportunities, breaking down the walls of prejudice”. 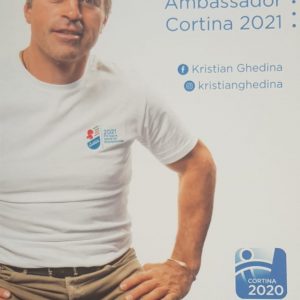 It's Kristian Ghedina the Eagle of Carnival 2020 The downhill champion will fly over St. Mark's Square recalling his memorable...