Sun, Venetian rowing and Venetian food and wine. The Pantegana Explosion at the second part of the
Venetian festival on the water that raised the curtain on the Venice Carnival 2020 has given to residents and tourists an unforgettable Sunday in the sign of the most authentic traditions of the Serenissima.  The protagonists of the day, as usual, the Venetian sport par excellence, the rowing to the Veneto region, the enthusiasm and good food offered by the restaurateurs of A.E.P.E. (Esercenti Pubblici
Esercizi Association) in the stands located on the banks of the Rio di Cannaregio.

Thousands of people along the fondamenta and the embarkations greeted the passage of the procession of boats which started at Punta della Dogana and crossed the Grand Canal. After the usual raising of oars in front of the
Rialto Bridge, the multitude of colourful boats, each one “dressed up” with a different theme, from the rooster to the gull, from dragon to dolphin, headed for the grand finale in Cannaregio.

At noon, the waiting explosion of the “Pantegana” that, from its back, has shot hundreds of confetti and streamers in the sky between the joyous applause of the audience.

The water parade organized by the Coordinamento Associazioni Remiere di Voga alla Veneta, it was preceded by the Carnival Regattas, women on gondolas and men on sandals. 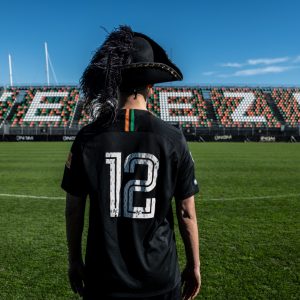