The Lagoon and Native Venice both represent one of the most sought after destinations for Foodies/Gourmands from all over the world who are learning to appreciate the excellence on offer such as the as the already famous moeche (young crab) and castraure (baby artichoke).
This land and its traditions are the fulcrum of Project Venissa, which, having reached its fifth year, has decided to celebrate the domestic cuisine and heritage of a wealth of recipes hidden away in the homes of Mazzorbo, Burano and Torcello.

As the director of the estate Matteo Bisol explains: “This year we want to celebrate the domestic cuisine, so side by side with the Restaurant, Osteria Contemporanea will come into being, where we will serve the traditional recipes that we are collecting from the recipe books of the families of Native Venice”.
The Osteria Contemporanea will give space to the traditional recipes and the Michelin-star Restaurant, for the third year running, will look after the creative interpretation of those same recipes.
“Venissa – Osteria Contemporanea” will open its doors on February 6th for Carnival together with the rooms of the Wine Resort.
For those of you who wish to pass the Carnival weekends in Native Venice, the area that gave rise to the tradition and where it continues to be intensely felt, Venissa has thought up several gourmet packages with which to match taste and tradition.
www.venissa.it
In the sure hope that you can showcase this news we have attached a picture of Venissa (Credits Mattia Mionetto), thank you for your kind attention and have a nice day. 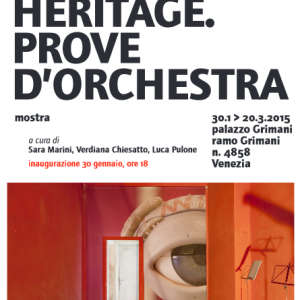 Thinking on the meaning of assets in three seminars and an exhibition at Palazzo Grimani by Sara Marini Department...