Thousands of people followed with their noses up the exciting flight of the Angel in St. Mark’s Square, which includes Aperol as the main partner of the event.

Linda Pani, 20 years old, from Mogliano Veneto, Maria dell’anno 2019, came down from the bell tower to a crowded St. Mark’s Square dressed in orange, officially opening the Carnival of Venice 2020.

The Angel flew on the notes of “Meraviglioso” and “Volare”, two hits by Domenico Modugno, the first in the reinterpretation of Negramaro. To sing the songs Chiara Luppi and Vittorio Matteucci. The choreography of the flight was created by Massimo Checchetto, artistic director of the Carnival, with Aperol, whose bright orange color was also recalled in the dress made as always by Atelier Stefano Nicolao.

An Angel of the Sun, to represent the game, love and madness, themes of Carnival 2020, and at the same time the joy, tradition and lightness of the event.

Welcomed by the Doge and the 12 Marys of the Carnival, the 2019 Mary kicked off the Carnival celebrations in Venice by toasting with an Aperol Spritz and didn’t hide the great emotion.

Before the Angel’s Flight, as every year, the parade of historical parades together with the Carnival associations by Cers, Consorzio Europeo Rievocazioni Storiche. On stage, more than 200 people from Italy and abroad parade in historical costumes and entertain the public in the square during the morning, in addition to the funny sketches of the Pantakin theatre company, the two singers Chiara Luppi and Vittorio Matteucci.

This year the Volo dell’Angelo was presented by Aperol, historical brand born in 1919 that owes to Veneto not only its roots, but also the success and diffusion of the aperitif ritual in the world. Official partner of the Carnival, Aperol could not miss the appointment with one of the symbolic moments of the Venetian tradition, since its distinctive feature is to connect people to each other.

The new global Aperol campaign, “Together We Joy”, a hymn to sharing and the joy of being together, was also presented on the screens of St. Mark’s Square.

The colourful stage, which welcomed Linda Pani’s flight and was the backdrop for the many initiatives in the square, refers to the themes of Carnival 2020, Game, Love and Madness and was designed to represent, with many brightly coloured cubes placed one on top of the other, a multitude of toys overturned and left in disarray by an imaginary “giant child”. The colors of the stage, instead, are a reference to the costume of Harlequin, imaginatively deconstructed and 80% of the set design is represented by interactive LED walls. This is a creative project created by the set designer of La Fenice Theatre and artistic director of the Carnival of Venice 2020, Massimo Checchetto who, for six years, has been responsible for the scenographic realization of the stage in St. Mark’s Square for the Carnival.

Linda Pani: “It was fantastic, a dream come true, I didn’t have to cry but I couldn’t hold back the tears and move myself, it was very short but intense, it just “flew”. I had always promised myself, since I was little, never to climb the bell tower of San Marco without being able to go down there like the Angel, and so I did: today was the first time I climbed up there. It was pure energy, you can’t describe it in words, the public looking at you, greeting you, the sun, the square, I am very happy, a wonderful experience. A beautiful message after the great water in November that shows how the city has recovered immediately, Venice is safe and it is the Venetians and non-Venetians who love it”.

Piero Rosa Salva, Sole Administrator of Vela: “Once again this year one of the most beautiful traditions of Venice is renewed with elegance and beauty in a splendid Piazza San Marco. We had a beautiful sunny day and a splendid public setting”.

Stefano Nicolao, “The dress was inspired by the official theme of the Carnival: a heart that symbolizes love, the game of the skirt that almost resembles a carousel and the madness of mixing materials created especially for the occasion”.

The dress is composed, at the top, of an orange silk corset with a laminated effect doubled in orange macramé, a front heart embroidered with Venetian stones and crystals, the wing sleeves in double crystal pleated and, on the neck, gold and white feathers. The wide skirt, on the other hand, articulated in multiple segments, with a lowering in orange macramé, is complete with reinforced petticoat, stockings and shoes.

The heart-shaped Angel’s hairstyle with crystals and feathers in shades of red and orange were created by “Monika and Umberto Hairstylist” with the collaborators Francesca Chiozzotto and Sabrina Vitturi. 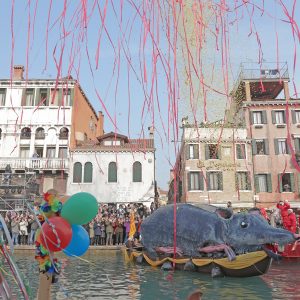 Sun, Venetian rowing and Venetian food and wine. The Pantegana Explosion at the second part of theVenetian festival on the water...