Whilst the EuroMillions is responsible for Europe’s biggest lottery jackpot (£161.7 million or US$260 million), it by no means compares with the staggering lottery prizes on offer in the United States. Only last year, fortunate Gloria Mackenzie from Florida was the sole winner of a huge $590.5 million (annuity) Powerball prize ($370.8 million cash option), the 3rd largest cash prize in the world. However, despite the staggering amount, responsible for the world’s biggest lottery jackpot to date is the Mega Millions, which reached a massive $656 million in March 2012.

Similarly to the EuroMillions lottery, Mega Millions draws take place twice weekly, on Tuesday and Friday evenings at approximately 11 pm, with the Mega Millions results usually available shortly after. They feature a guaranteed $15 million jackpot and players must match all 5 main numbers and the Gold Mega Ball number to win. In the event of no first category winner, the prize money in the subsequent draw is increased by at least $5 million. As a result, the Mega Millions first prize has the potential of reaching incredible sums. This was quite the case in March 2012 when the Mega Millions jackpot reached a whopping $656 million dollars (annuity value), or $474 (cash option), making it the biggest lottery payout in world history.

Mega Millions Winners From IllinoisThe huge prize was split three ways between winning ticket holders from Kansas, Illinois and Maryland. The winning Mega Millions numbers were: 2, 4, 23, 38 and 46 with the Gold Mega Ball 23. Newly-made millionaires can either claim their prize in 30 yearly instalments (annuity) or opt for a lump sum (cash option) at the cost of a substantial deduction. All three winners chose the cash option which corresponded to a whopping $158 million each.

The Mega Millions lottery also boasts the world’s second largest lottery jackpot at $648 million (annuity value) or $347,639,485 (cash option), which was shared out between two players from the states of California and Georgia. The largest single ticket Mega Millions win dates back to March the 25th 2011 when a lucky ticket holder from New York scooped $319 million (annuity) or $202.9 million (cash option).

Luxury Vending Machines Across The World 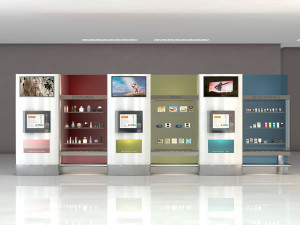 Luxury Vending Machines Across The World

Luxury just got even more convenient with the latest trend in flashy vending machines selling expensive items ranging from...