The Ape & Bird: Restaurant review – Polpo’s Russell Norman has pushed his little plates aside for his first pub

The Ape & Bird: Restaurant review – Polpo’s Russell Norman has pushed his little plates aside for his first pub

While using the Polpo cookbook the other day, I had a moment to think about why the book was one of last year’s biggest successes. Perhaps because it has an innovative spine that allows it to lie flat; perhaps because it looks beautiful and the recipes work; perhaps because it is true to one, quite specific cuisine – the Venetian cicchetti (little plates)

I’ve been trying to figure out why the author Russell Norman – whose small group of restaurants is largely based on the Venetian idea – has gone right outside his comfort zone with his newest venture. The absolute opposite of the tiny, cosy boltholes he created that have been hugely influential on Britain’s restaurant scene, his latest is a big ol’ pub.

The Ape & Bird is right on Shaftesbury Avenue by Cambridge Circus, a magnet that attracts tourists like so many iron filings. This is not a place to be stumbled upon and charmed by; it wants all-comers: four bars, a 120-seater restaurant and three floors (and, no doubt, a hefty commercial rates bill).

On a Sunday when Theatreland and Oxford Street are at their most crazed, ducking into The Ape & Bird for a bite feels like an escape, even if a few days after opening it’s already so full only seats at the bar are left.

The ground-floor’s main bar feels airy – high ceilings and lots of glass will do that – but tables are hugger-mugger and I have an intimate knowledge of which cheeses the American tourists to my right are enjoying. I rather like that in a pub: chance conversations and chance observations – the German visitor on my left who complains about the size of the darling little wine glass he’s offered; the harried shopper who comes in, is dismayed by the beers on offer, and leaves.

On that note, there are just four beers on tap, which seems a little draconian in a boozer, but what Norman is doing here is emphasising the gastro in gastropub – and there are cocktails aplenty being shaken by the obligatorily heavily inked bar staff, as well as a perky wine list.

To the food. It being Sunday, Mr M wants a roast and I gladly devolve responsibility for it to chef director Tom Oldroyd and his team; the lamb, roasties, carrots and kale (obvs, this being the year of the kale) come with a large jug of silky gravy. But he’s grown accustomed to more generous portions (hello, Thatched House; hello, Parlour) and says the meat-and-potato ratio to gravy is all wrong.

I’ve ordered piecemeal (piecemeal, geddit?) and my chicken, bacon and leek pie (£11), roasted beetroot with kale pesto, and cauliflower cheese (£5 each) make for a pleasingly colourful combo – all served in blue-edged enamel dishes. The pie is lovely, hunks of white meat (possibly pre-roasted to give that much flavour?) and a deeply savoury sauce from the salty bacon, all under a flaky pastry roof. The beets are lovely, a medley of red and golden, and the k-word is barely detectable in the nutty dressing. The cauliflower cheese is drenched in sauce, just how any sane person likes it, and with a blistered brown surface.

The kid, newly sworn off meat, has crab on toast and cheesy fries. The rusty-coloured topping is very generous, with more brown than white crab going on, which we don’t care about, but for £9 might bother some. The dank sea vegetable garnish is left, like a tidemark on a messy beach.

The fries are forgotten in the ordering mêlée, but luckily Mr Norman – a blur of activity around the place – spots the teen’s anxiety at missing her carb fix and a dish of thin chips with melty proper cheese on top arrives PDQ.

By now, any right-minded person would be dozing in front of the telly, but we have to hack through the hordes to get back home, so pudding is allowed. Mr M and I share a date pudding with ice-cream; a lovely square of gummy sponge with lashings of toffee-ish sauce, made even better (the shame) for the addition of 3in of cream lopped off the top of the kid’s bannoffeebocker glory (£7 each).

This is a “pie and a pint” and “bloody Mary and a burger” place for people who don’t want to stand up, get jostled or have the Premiership blaring at them. People like, well, me who have lately suffered from gastropub-enter-itis. It should go a long way towards restoring our overseas visitors’ faith in pubs, too. 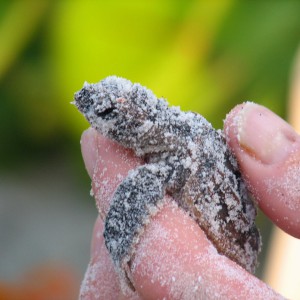 Nesting sea turtles return to Sicily Loggerhead sea turtles have returned to lay their eggs at a historical nesting site...