The general test of lifting the bulkheads of the Mose project at the mouth of the port of Malamocco, one of the three access gates to the City by sea together with Chioggia and Punta Sabbioni, was successfully concluded on 3 December in Venice.
A test of the Mose project, decidedly historic and arrived at a time of great importance after the exceptional ‘high water’ of 12 November last, which recorded 187 cm in height, the second highest tide in history after 196cm in 1966.
To date, the plant for the Mose project is still temporary so the raising of barriers has taken place more slowly than expected but it seems that finally everything has gone well.

The Mose project test had been suspended at the beginning of November after the technicians had found some vibrations to the brackets supporting the compressed air pipes, which are used to raise the barriers from the bottom.
The authorities have ordered a ban on navigation in the area affected by the test of the Mose project.
The test is stratgically important, as the government has indicated the need to speed up the completion and testing of the hydraulic work Mose project that will defend Venice from exceptional high tides and that has been under construction for decades. 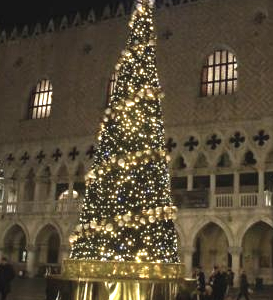