Program of the inaugaration of “Paolo Sarpi” exhibition:

The “Paolo Sarpi” exhibition, on the occasion of the 400th anniversary of its publication in London in 1619, for the types of John Bill (Giovanni Billio) and without the full consent of the author, is curated by Carlo Campana and will be open to the public from December 5, 2019 to January 19, 2020 with admission from the Museo Correr (Piazza San Marco, Ala Napolenica).

Biblioteca Nazionale Marciana preserves numerous testimonies and traces of the genesis and completion of the edition: first of all the manuscript It. V, 25 (=5942), which presents the final version of the text, drawn up by Marco Fanzano with important and substantial corrections and additions by Sarpi himself and Fulgenzio Micanzio; also, the exemplar of the Historia del Concilio di Trento by Antonio Milledonne (Ms. It. IV, 115 (=5829) used and annotated by Sarpi for the drafting of his treatise; many other witnesses and manuscript and printed documents concerning Sarpi’s Historia and the historical, political and religious context in which it was conceived and written.

“Paolo Sarpi” exhibition was conceived with the intent, among others, to highlight the genesis, diffusion and European fortune of Sarpi’s work and to demonstrate how much the publication was the result of a triple interest, still of European dimension, to man, to the event, to the text.

Who was Paolo Sarpi

Paolo Sarpi (14 August 1552 – 15 January 1623) was an Italian historian, prelate, scientist, canon lawyer, and statesman active on behalf of the Venetian Republic during the period of its successful defiance of the papal interdict (1605–1607) and its war (1615–1617) with Austria over the Uskok pirates. His writings, frankly polemical and highly critical of the Catholic Church and its Scholastic tradition, “inspired both Hobbes and Edward Gibbon in their own historical debunkings of priestcraft.”[1] Sarpi’s major work, the History of the Council of Trent (1619), was published in London in 1619; other works: a History of Ecclesiastical Benefices, History of the Interdict and his Supplement to the History of the Uskoks, appeared posthumously. Organized around single topics, they are early examples of the genre of the historical monograph.[2]

As a defender of the liberties of Republican Venice and proponent of the separation of Church and state,[3] Sarpi attained fame as a hero of republicanism and free thought and possible crypto Protestant.[4] His last words, “Esto perpetua” (“may she [i.e., the republic] live forever”), were recalled by John Adams in 1820 in a letter to Thomas Jefferson, when Adams “wished ‘as devoutly as Father Paul for the preservation of our vast American empire and our free institutions’, as Sarpi had wished for the preservation of Venice and its institutions.”[5]

Sarpi was also an experimental scientist, a proponent of the Copernican system, a friend and patron of Galileo Galilei,[6] and a keen follower of the latest research on anatomy, astronomy, and ballistics at the University of Padua. His extensive network of correspondents included Francis Bacon and William Harvey.

Sarpi believed that government institutions should rescind their censorship of Avvisi—the newsletters which started to be common in his time—and instead of censorship publish their own version so as to combat enemy publication. Acting himself in that spirit, Sarpi published several pamphlets in defense of Venice’s rights over the Adriatic. As such, Sarpi could be considered as an early advocate of the Freedom of the Press, though the concept did not yet exist in his lifetime. 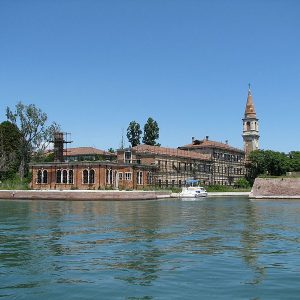 One of the most frightening and, it is said, haunted places in the world is located a few kilometers from the heart of Venice:...